I’m making good progress on my Twisted buildings (I got the two Nouveau Archways done, and I’ve started an Old Corner Shop), but before I give an update on those, I thought you might be interested in having a look at some of my previous work on some related buildings for the Wolsung Steampunk Skirmish Game.

Wolsung SSG is a great skirmish game by the very talented Micro Art Studio set in a steampunk universe interwoven with magic where several factions vie for dominance.  Just like with Twisted, I first heard of Wolsung SSG  during their Kickstarter campaign.  Several of the game mechanics are quite unique, and this was the first time I had ever seen a standard deck of playing cards being used to affect gameplay in a miniatures game.  I easily fell in love with the Inventors and their adorable robots, and my husband, Alex, was likewise quite taken with the Scylla, a very unique halfling mafia group with ogre thugs to do their grunt work.  And the terrain…

Well, you ought to know by now that if nothing else, the terrain will sell me on a new game.  The range of buildings and accessories Micro Art designed for Wolsung SSG truly made my jaw drop.  The detailed MDF buildings were designed so that you could lift the top off and remove different levels, revealing the inside as additional play areas.  This was my first foray into MDF terrain, and I was truly excited.  This was basically a bunch of dollhouses, but better!

The Kickstarter rewards are now long past delivered, and we’ve had plenty of time to put buildings together and enjoy the game.  Honestly, I’ve been dying to play recently!  But back to the matter at hand: terrain.  At first, I simply removed the pieces from the MDF sheets and had Alex put them together.  He has been a tabletop gamer for most of his life, but I was still relatively new to the idea of putting something like these complex buildings together.  As time went on, I tried painting some of them (I started small, with some of the small ramshackle shacks), and then I got up the courage to build some myself.  I discovered that I love it!

Alas, I still don’t have all of these delightful buildings assembled and/or painted (we do have quite a lot of them), but here is what I do have ready to show.

You can even stack them! 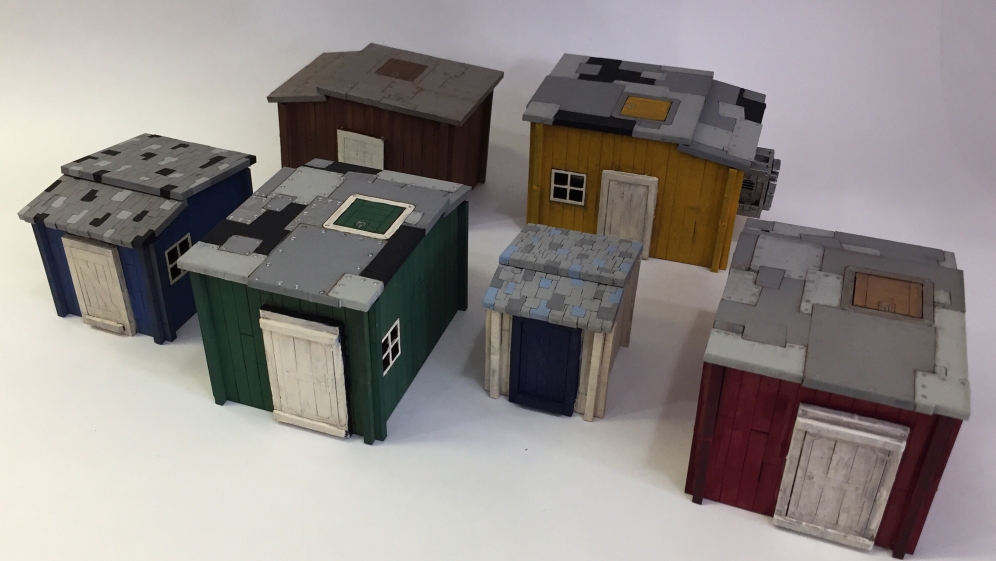 XIX Century Shantytowns
There are so many ‘XIX Century Shantytowns‘ to show because a set of four was one of the free stretch goal backer rewards during the Kickstarter.  Alex and I backed the campaign on two accounts each in order to maximize our freebies.  You have to save some money when you can in this hobby; it’s just being resourceful.  This is a boutique (read: niche, small-scale, high quality, but a bit on the expensive side) game, after all.  These little cuties were the first Wolsung project I tackled, and they were a joy to paint.  Like all of the Wolsung buildings, the roofs lift off from these tiny abodes in case you want to use the inside space for additional play area.  I still have more to assemble, believe it or not.

Six smaller one-sided stands are ready for goods.
These ‘XIX Century Stands‘ were the first MDF pieces that I assembled on my own, and they were also very fun to paint.  I started making some wares to display in them, but I haven’t quite finished that task.  I’ll return to it one day.  After all, as we say in the tabletop gaming hobby: as long as you have unfinished projects, you can never die.

Level 2
This ‘XIX Century Block of Flats‘ is still a work in progress.  I still have the roof and the inside to paint.  There are even perfect little acrylic windowpanes to glue in when everything is done.  I am truly impressed with how easy it is to lift off, and later replace, the different levels of the building.  I have two more blocks of flats to paint up once this one is finished.

There are some assembled but so far unpainted pieces as well, but I’ll save those for another day.

Disclaimer: I’m not partnered with or sponsored by any companies mentioned.